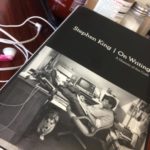 Apologies. I know Reid brought this up before but until I get the old content back online, I have to create this from scratch. Feel free to repeat anything that comes to mind.

As I wrote on IG, I generally stay away from books about writing because I don’t want to be one of those people who reads about writing and talks about writing more than he actually writes. But I need a bit of inspiration, and I’ve owned this copy for four years, so I’m going through it during Camp NaNoWriMo. “We are writers, and we never ask one another where we get our ideas; we know we don’t know.”

16 thoughts on “Notes on Stephen King’s On Writing”